We have only just learned of the passing of Kip Jones in November 2021. In 2001 he became a member of the Editorial Team of FQS, a position he held until 2009; together with Günter Mey, he was responsible for the FQS Reviews section. Subsequently, he became a member of the Editorial Board. In addition to several single contributions, he initiated the special issue on Performative Sozialwissenschaft / Performative Social Science (PSS), co-editing it  with colleagues; thus significantly helping to outline this field of research at a very early stage. He is certainly a central representative of PSS.

In addition to his own diverse works—including film scripts, short stories, poetics and autofiction—he has created places for exchange at the University of Bournemouth and the conferences and workshops organized there, as well as with the mailing list he initiated, and he has continuously contributed to the dissemination and establishment of PSS. Undeniably his most important project was the short film Rufus Stone, based on results of a study on the aging LGBTQ+ population; he wrote the script and was responsible for producing the collaborative effort with the film's director and actors. Since his retirement, he has continued to work passionately on PPS. His most recent project was to edit the book Doing Performative Social Science: Creativity in Doing Research and Reaching Communities, which will be published by Routledge in 2022. It is his legacy.

A scholar like Kip Jones reminds us that social science research to be effective needs to reflect the lived experiences of those individuals and groups who are studied. All the world's a stage. 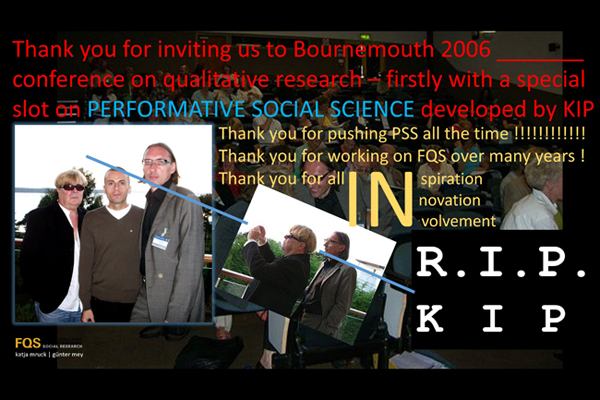